The Froala product team has been working diligently toward adding new features along with quality improvements to enable our users to build better applications using Froala. We’ve been getting requests for a public roadmap of what we have in store for Froala and we are excited to share our plans with our community!

In this roadmap post, we’ll take a look at our most recent release, outline the plans for Froala Editor for the next 6 months or so, give you a sneak peak of an exciting new product addition that’s coming to the Froala product line, highlight our strong focus on increased quality releases, and more!

At the end of July, we released Froala Editor 3.2. The Editor 3.2 release included the most highly customer requested feature, an improved file upload system. Through the 3.2 release, we’ve equipped users with a completely overhauled file upload manager, capable of handling multiple images, video uploads, folders, and more. While building this new image manager, we put special care toward ensuring that the UI was intuitive with seamlessly incorporated drag and drop, browse, and multi-upload functionality, allowing your users to upload and manipulate their files of most popular formats all in one place. 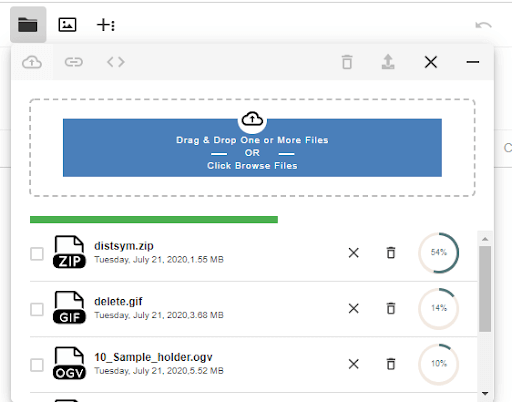 In addition to the image uploading capabilities introduced in 3.2, we also added some smaller features and addressed a number of quality related tickets.

Looking Ahead: What’s Planned Next

As part of this roadmap, we wanted to provide some specific details on what we’ve planned for the next 6 months and beyond.

Up next: Froala Editor 3.3 Release: Markdown and Track Changes Support

Planned for release in late 2020 or early 2021, the 3.3 release will address our next most highly requested features after the image manager support we introduced in 3.2. The Track Changes feature will keep track of changes in Froala Editor whenever users edit text. This will include support for tracking changes for newly added text and deleted text, as well as various styling and text formatting changes.

Markdown support will allow Froala Editor users to easily add Markdown syntax to their text to indicate which words and phrases need to be formatted. For example, to denote a heading, a user can simply add a hash sign before it (e.g. #HeadingOne). To change the formatting on a phrase from regular to bold, a user just has to add two asterisks before and after the phrase (e.g. **this text is now bold**). In addition to new features, the 3.3 release will also include a number of quality improvements.

Planned for release in early 2021, the 3.4 release will add another top customer requested feature. We plan to introduce a pluggable icon system that allows developers to use a variety of icon libraries such as Font Awesome, Material icons etc. to change the look and feel of the Froala Editor toolbar and icons. As part of the 3.4 release, we also intend to update our user interface icons while maintaining compatibility for customers using Font Awesome 4 and 5 JS. In addition to new features, the 3.4 release will also include a number of quality improvements.

Around mid 2021, we plan to introduce a native mobile editor and advanced folder management, in addition to a number of other features that are currently being reviewed by the product team. Expect more details in another roadmap update in about 6 months.

Froala Charts is going to be a brand new product from Froala, providing interactive charts to build insightful data visualizations in your web or mobile apps. All of the major JavaScript frameworks will be supported and it is written in Vanilla JS.

Froala Charts allows users to configure charts to suit their unique needs. You can use attributes, layers or events and APIs along with abundant charting features to create insightful dashboards.

Here’s a sneak peak of what is planned:

With 20+ chart types, Froala Charts XT consists of the most commonly used charts like column, line, and pie for your reports and dashboards.

From Gauges and KPIs to funnel and pyramid charts, Froala Widgets makes your dashboards and monitors a lot more insightful.

With the inclusion of heat & treemaps, radar, and statistical charts, Froala Power Charts is a set of advanced charting widgets for domain-specific usage.

Keep your eyes out for an announcement on this existing new product release from Froala – planned for release in the first part of Q4 CY 20.

Shape the Future of Froala

We love hearing from our customers. If you’re not already aware, we have a product idea board set up for Froala, where you can vote on other users’ feature suggestions or suggest features you’d like to see added to the product. We are notorious for building out the most requested features as illustrated with advanced image manager, track changes, markdown, and many other features over the last 12 months.

You can choose to be notified of updates to feature requests, including when a feature has been introduced in a new Froala release. In addition to the public idea board, paying Froala customers can also get in touch with our excellent support staff on any technical questions or to provide feedback on new functionality they’d like to see in our Froala product line. Feature suggestions are frequently reviewed by the product team for inclusion in future product releases. 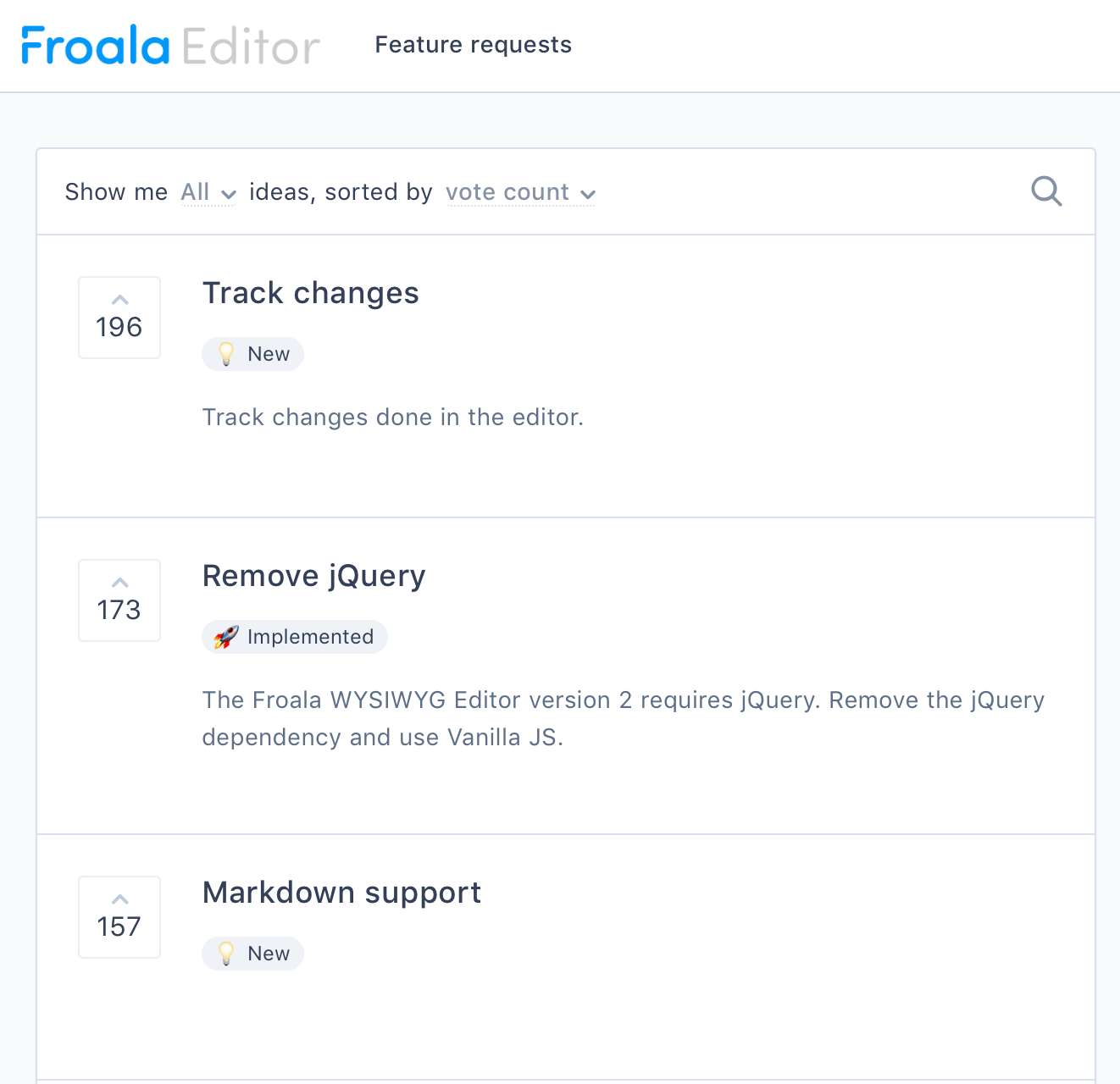 Note: These plans and roadmap represent our intentions as of this date, but our development plans and priorities are subject to change. Accordingly, we can’t offer any commitments or other forms of assurance that we’ll ultimately release any or all of the described products on the schedule or in the order described, or at all. These general indications of development schedules or “product roadmaps” should not be interpreted or construed as any form of a commitment, and our customers’ rights to upgrades, updates, enhancements, and other maintenance releases will be set forth in the applicable software license agreement.